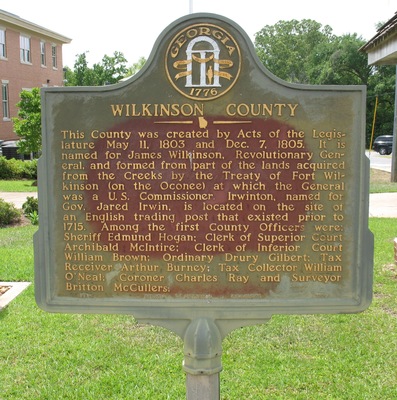 This marker is in front of the Courthouse in Irwinton, GA

" This County was created by Acts of the Legislature May 11, 1803 and Dec. 7, 1805. It is named for James Wilkinson, Revolutionary General, and formed from part of the lands acquired from the Creeks by the Treaty of Fort Wilkinson (on the Oconee) at which the General was a U.S. Commissioner. Irwinton, named for Gov. Jared Irwin, is located on the site of an English trading post that existed prior to 1715. Among the first County Officers were: Sheriff Edmund Hogan; Clerk of Superior Court Archibald McIntire; Clerk of Inferior Court William Brown; Ordinary Drury Gilbert; Tax Receiver Arthur Burney; Tax Collector William O`Neal; Coroner Charles Ray and Surveyor Britton McCullers."