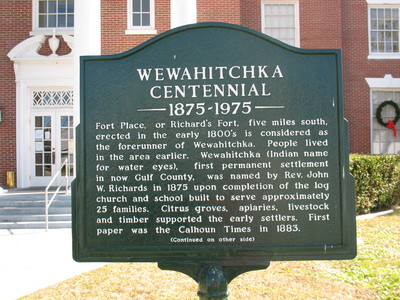 This waymark details the founding of Wewahitchka, FL. It is found in front of the old Gulf County Courthouse. This marker was placed to commemorate the establishment of Wewahitchka in 1875. Wewahitchka was founded in 1875 Rev John W. Richards. The Richards family had been in the local area since the early 1800s. One of the local cemeteries is named in honor of Jehu Richards who as a young boy survived an Indian massacre during the First Seminole Was in 1818.