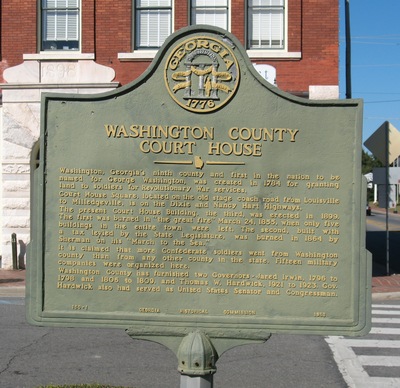 " Washington, Georgia`s ninth county and first in the nation to be named for George Washington, was created in 1784 for granting land to soldiers for Revolutionary War services.

Court House Square, located on the old stage coach road from Louisville to Milledgeville, is on the Dixie and Nancy Hart Highways.

The present Court House Building, the third, was erected in 1899. The first was burned in `the great fire` March 24, 1855, when only five buildings in the entire town were left. The second, built with a tax levied by the State Legislature, was burned in 1864 by Sherman on his `March to the Sea.`

It is claimed that more Confederate soldiers went from Washington county than any other county in the state. Fifteen military companies were organized here.