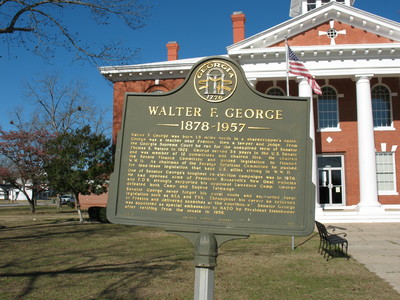 This marker is located On Hamilton Street at the Courthouse in Preston, GA.

" Walter F. George was born 1.5 miles north in a sharecropper`s cabin. George was a teacher near Preston, then a lawyer and judge. From the Georgia Supreme Court he ran for the unexpired term of Senator Thomas E. Watson in 1922. George served 34 years in the U.S. Senate and was member of 12 committees and chaired five. He chaired the Senate Finance Committee and guided legislation to finance W.W. II. As chairman of the Foreign Relations Committee he pushed for lend-lease legislation that kept U.S. allies strong in W.W. II

One of Senator George`s toughest re-election campaigns was in 1938. He had opposed some of President Roosevelt`s New Deal policies and F.D.R. strongly supported his opponent Lawrence Camp. George defeated both Camp and Eugene Talmadge.

Senator George never forgot his rural roots and supported rural legislation such as REA and TV/A. Throughout his career he returned to Preston and delivered speeches at the courthouse. Senator George was appointed as special ambassador to NATO by President Eisenhower after retiring from the senate in 1956."