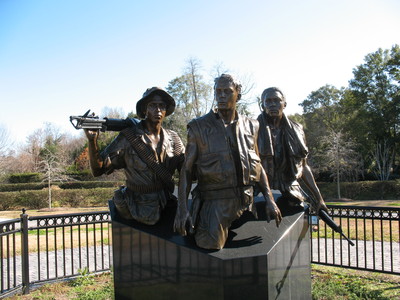 The Three Soldiers Monument in Apalachicola, Florida, pays honor to the Southern solders who served in Vietnam. The monument was cast from the original molds of sculptor Frederick Hart's stunning Three Soldiers statue that stands at the Vietnam Veterans Memorial in Washington, D.C. It was funded by the Frederick Hart estate and the Vietnam Veterans Memorial Fund and was cast in 2008.

The stone at the monument reads as :

" Dedicated this 12th day of July, 2008 in memory of those persons from the South who valiantly served their country during the Vietnam War (1959 - 1975). Their commitment to their country, to freedom and to each other will long be honored by this memorial which represents, for all time, the human face of those who served."