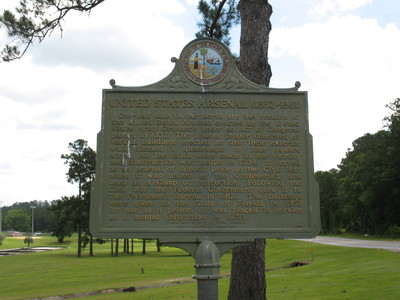 " One-half mile to the north are the remains of the United States Arsenal erected by the United States Army Ordnance under an Act of Congress passed in 1832. The arsenal proper consisted of various buildings erected so that their exterior walls formed a quadrangle of four square acres. All the brick were made in the vicinity and construction was begun in 1834. It served as an arsenal of deposit prior to the Civil War, when it was seized by the Confederacy and used as a Camp of Instruction. Following the Civil War the Federal Government gave it to the Freedman Bureau in 1866. The buildings were given to the State of Florida in 1869 for use as a prison. It was placed in service as a mental institution in 1876."

Placed By The Florida Board of Parks and Historic Memorials in cooperation with Florida Federation of Garden Clubs, Inc.