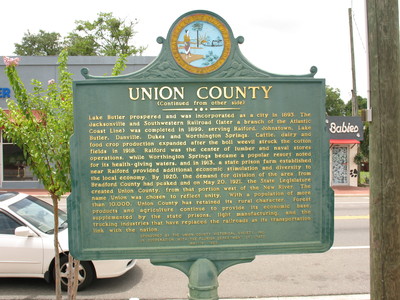 The text reads as : (side 2) continued form side 1

" Lake Butler prospered and was incorporated as a city in 1893. The Jacksonville and Southwestern Railroad (later a branch of the Atlantic Coast Line) was completed in 1899, serving Raiford, Johnstown, Lake Butler, Danville, Dukes and Worthington Springs. Cattle, dairy and food crop production expanded after the boll weevil struck the cotton fields in 1918. Raiford was the center of lumber and naval stores operations, while Worthington Springs became a popular resort noted for its health-giving waters, and in 1913, a state prison farm established near Raiford provided additional economic stimulation and diversity to the local economy. By 1920, the demand for division of the area from Bradford County had peaked and on May 20, 1921, the State Legislature created Union County, from that portion west of the New River. The name Union was chosen to reflect unity. With a population of more than 10,000, Union County has retained its rural character. Forest products and agriculture continue to provide its economic base, supplemented by the state prisons, light manufacturing, and the trucking industries that have replaced the railroads as its transportation link with the nation."

Placed By The Union County Historical Society, Inc. in Cooperation with the Florida Department of State