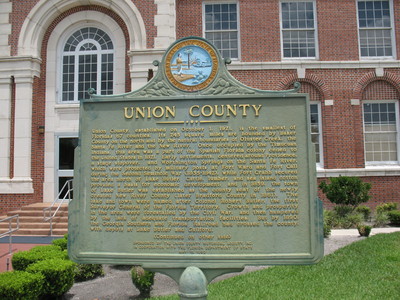 " Union County, established on October 1, 1921, is the smallest of Florida's 67 counties. Its 245 square miles are bounded by Baker County on the north and by the natural boundaries of Olustee Creek, the Santa Fe River and the New River. Once occupied by the Timucuan Indians, this area was a part of the Spanish Florida colony ceded to the United States in 1821. Early settlements, centered around Providence, a stage stopover, and Worthington Springs on the Santa Fe River, which were protected by military posts at Fort Ward and Fort Call during the Second Seminole War (1835-1842), while Fort Crabb secured the area north of Lake Butler. Cattle, lumber, and sea island cotton provided a basis for economic development, and in 1859, the town of Lake Butler was established as the county seat of the newly created New River County (later Bradford County in 1861). The lake and town were named after Colonel Robert Butler, the first Surveyor General of the Florida Territory. Growth and prosperity in the area were forestalled by the Civil War, and then hampered by the lack of adequate transportation facilities. But by 1890, the Georgia Southern and Florida Railroad had crossed the county, with depots at Lake Butler and Guilford."

Placed By The Union County Historical Society, Inc. in Cooperation with the Florida Department of State