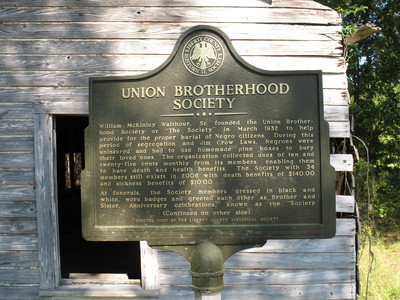 "William McKinley Walthour, Sr., founded the Union Brotherhood Society or “The Society” in March 1932 to help provide for the proper burial of Negro citizens. During this period of segregation and Jim Crow Laws, Negroes were uninsured and had to use homemade pine boxes to bury their loved ones. The organization collected dues of ten and twenty-five cents monthly from its members; enabling them to have death and health benefits. The Society with 34 members still exists in 2006 with death benefits of $140.00 and sickness benefits of $10.00. At funerals, the Society members dressed in black and white, wore badges and greeted each other as Brother and Sister. Anniversary celebrations, known as the “Society (Continued on other side)