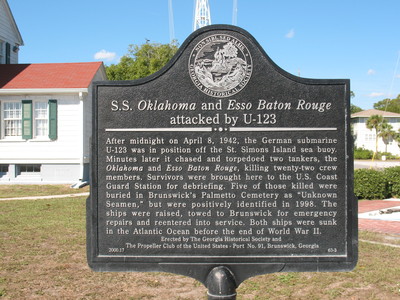 S.S. Oklahoma and Esso Baton Rouge, the two tankers , were attacked by U-123, the German submarine.

The marker is located on Saint Simons Island in Glynn County, Georgia.

" After midnight on April 8, 1942, the German submarine U-123 was in position off the St. Simons Island sea buoy. Minutes later it chased and torpedoed two tankers, the Oklahoma and Esso Baton Rouge, killing twenty-two crew members. Survivors were brought here to the U.S. Coast Guard Station for debriefing. Five of those killed were buried in Brunswick`s Palmetto Cemetery as "Unknown Seamen," but were positively identified in 1998. The ships were raised, towed to Brunswick for emergency repairs and reentered into service. Both ships were sunk in the Atlantic Ocean before the end of World War II."

Placed By The Georgia Historical Society and The Propeller Club of the United States--Port No. 91, Brunswick, Georgia