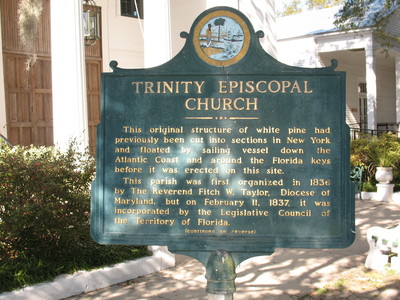 Trinity Episcopal Church, originally known as Christ Church,] is a historic house of worship in Apalachicola, Florida, It is a remarkable Florida landmark. On June 30, 1972, it was added to the U.S. National Register of Historic Places.

The text on the marker reads as: (side 1)

" This original structure of white pine had previously been cut into sections in New York and floated by sailing vessel down the Atlantic Coast and around the Florida keys before it was erected on this site. This parish was first organized in 1836 by The Reverend Fitch W. Taylor, Diocese of Maryland, but on February 11, 1837, it was incorporated by the Legislative Council of the Territory of Florida. "

continued on other side ....

Erected 1966 by Apalachicola Historical Society / Florida Board of Parks and Historic Memorials.