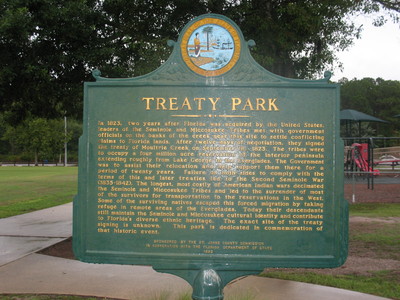 This marker is located at Treaty park on Wildwood Drive in St Augustine, Fl.

" In 1823, two years after Florida was acquired by the United States, leaders of the Seminole and Miccosukee Tribes met with government officials on the banks of the creek near this site to settle conflicting claims to Florida lands. After twelve days of negotiation, they signed the treaty of Moultrie Creek on September 18, 1823. The tribes were to occupy a four million acre reservation of the interior peninsula extending roughly from Lake George to the Everglades. The Government was to assist their relocation and help support them there for a period of twenty years. Failure on both sides to comply with the terms of this and later treaties led to the Second Seminole War (1835-1842). The longest, most costly of American Indian wars decimated the Seminole and Miccosukee Tribes and led to the surrender of most of the survivors for transportation to the reservations in the West. Some of the surviving natives escaped this forced migration by taking refuge in remote areas of the Everglades. Today their descendants still maintain the Seminole and Miccosukee cultural identity and contribute to Florida´s diverse ethnic heritage. The exact site of the treaty signing is unknown. This park is dedicated in commemoration of that historic event."

Sponsored by the St. Johns County Commission in cooperation with the Florida Department of State