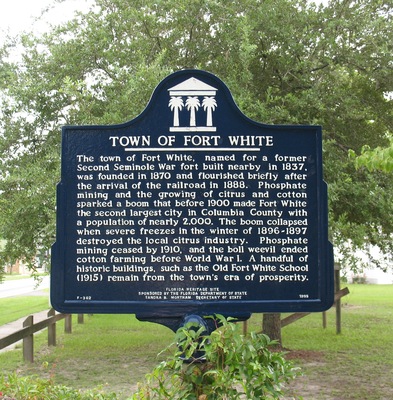 The text on the marker reads as : " The town of Fort White, named for a former Second Seminole War fort built nearby in 1837, was founded in 1870 and flourished briefly after the arrival of the railroad in 1888. Phosphate mining and the growing of citrus and cotton sparked a boom that before 1900 made Fort White the second largest city in Columbia County with a population of nearly 2,000. The boom collapsed when severe freezes in the winter of 1896-1897 destroyed the local citrus industry. Phosphate mining ceased by 1910, and the boll weevil ended cotton farming before World War I. A handful of historic buildings, such as the Old Fort White School (1915) remain from the town's era of prosperity."

Sponsors: The Florida Department of State.