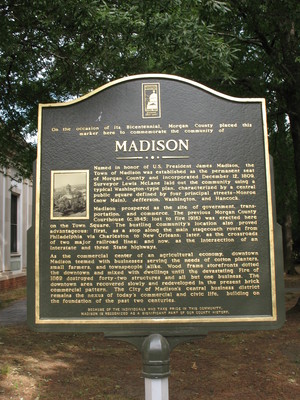 It is located on US 278 at the post office (on the square) in Madison.

Madison prospered as the site of government, transportation, and commerce. The previous Morgan County Courthouse (c. 1845; lost to fire 1916) was erected here on the town square. The bustling community´s location also proved advantageous: first, as a stop along the main stagecoach route from Philadelphia via Charleston to New Orleans; later, as the crossroads of two major railroad lines; and now, as the intersection of an Interstate in three state highways.

As a commercial center of an agricultural economy, downtown Madison teamed with businesses serving the needs of cotton planters, small farmers, and townspeople alike. Wood frame storefronts dotted downtown and mixed with dwellings until the devastating fire of 1869 destroyed 42 structures and all but one business. The downtown area recovered slowly and redeveloped in the present brick commercial pattern. The city of Madison´s central business district remains the nexus of today´s commercial in civic life, building on the foundation of the past two centuries.

Because of the individuals who take pride in this community, Madison is recognized as a significant part of our County´s history."