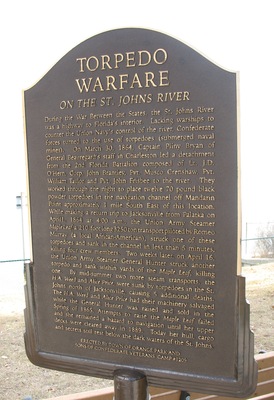 This marker is located on the intersection of Kingsley Avenue and River Road in Orange Park, Florida.

" During the War Between the States, the St. Johns River was a highway to Florida´s interior. Lacking warships to counter the Union Navy´s control of the river, Confederate forces turned to the use of torpedoes (submerged navel mines). On March 30, 1864, Captain Pliny Bryan of General Beauregard´s staff in Charleston led a detachment from the 2nd Florida Battalion composed of Lt. J.D. O´Hern, Corp. John Brantley, Pvt. Musco Crenshaw, Pvt. William Taylor and Pvt. John Frisbee to the river. They worked through the night to place twelve 709 pound black powder torpedoes in the navigation channel off Mandarin Point approximately 1 mile South East of this location. While making a return trip to Jacksonville from Palatka on April 1, 1864 at 4:00 a.m., the Union Army Steamer Maple Leaf, a 210 footlong 3250 ton transport piloted by Romeo Murray (a local African-American), struck one of these torpedoes and sank in the channel in less than 5 minutes, killing four crew members. Two weeks later, on April 16, the Union Army Steamer General Hunter struck another torpedo and sank within yards of the Maple Leaf, killing one. By mid-summer two more steam transports, the H.A. Weed and Alice Price, were sunk by torpedoes in the St. Johns north of Jacksonville, causing 5 additional deaths. The H.A. Weed and Alice Price had their machinery salvaged while the General Hunter was raised and sold in the spring of 1865. Attempts to raise the Maple Leaf failed and she remained a hazard to navigation until her upper decks were cleared away in 1889. Today her hull, cargo and secrets still rest below the dark waters of the St. Johns. "

Town of Orange Park and Sons of Confederate Veterans #1209