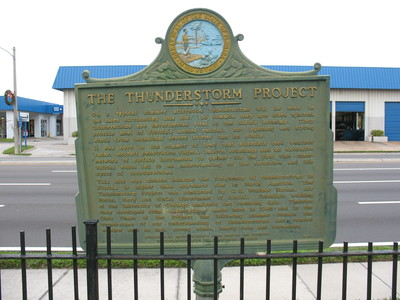 The Thunder storm Project (1946-1949) The summer of 1996 marked the 50th anniversary of the Florida phase of the Thunderstorm Project. The Thunderstorm Project was a cooperative undertaking on the part of four U.S. government agencies: the U.S. Weather Bureau, the U.S. Army Air Force, Navy, and National Advisory Committee for Aeronautics (which later became NASA). The initial phase of the Thunderstorm Project was carried out in central Florida over an area adjacent to the site of present-day Walt Disney World. Because of the pioneering significance of the project and its important contributions to the understanding of our environment, a permanent historical marker was erected to commemorate the project and all who contributed to its success.

" On a typical summer afternoon thunderstorms will be seen in the skies surrounding this site. So common they are often ignored, thunderstorms are nevertheless vital to the State's economy. They provide most of Florida's annual rainfall, but lightening and strong winds from occasional severe storms can be costly. It was here in the summer of 1946 that scientists used weather radar, aircraft penetration flights, balloon soundings and an extensive network of surface instruments to gather - for the first time - observations which led to an understanding of the structure and life cycle of thunderstorms. This site was chosen because the frequency of thunderstorms in Florida is higher than anywhere else in North America. The Thunderstorm Project was conducted by U.S. Weather Bureau, Air Force, Navy and NACA (forerunner of NASA). Scientists working at the University of Chicago analyzed the resulting data. Theories they developed from observations made here in 1946 - and in the Ohio Phase of the Project the following summer - remain the cornerstone of our understanding of thunderstorms and related weather such as hail, strong winds, heavy rain and tornadoes. "

Placed By Meteorologists from around the country in cooperation with the Department of State in 1986.