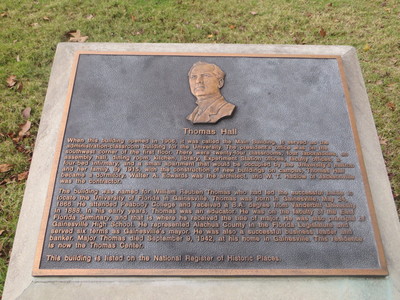 Thomas Hall opened in 1906 and was originally used as a multipurpose building. It housed offices, classrooms, dining and housing facilities until its renovation in 1984, when it became exclusive to student housing. Today, Thomas Hall is part of the Murphree Area of residences, located near Ben Hill Griffin Stadium and the Stephen C. O'Connell Center.

" When this building opened in 1906, it was called the Main Building. It served as the administration-classroom building for the University. The president's office was on the southwest corner of the first floor. There were twenty-four classrooms, four laboratories, an assembly hall, dining room, kitchen, library, Experiment Station offices, faculty offices, a four-bed infirmary, and a small apartment that would be occupied by the University's matron and her family. By 1915, with the construction of new buildings on campus, Thomas Hall became a dormitory. Wm. A. Edwards was the architect, and W.T. Hadlow of Jacksonville was the contractor.

The building was named for William Reuben Thomas who had led the successful battle to locate the University of Florida in Gainesville. Thomas was born in Gainesville, May 24, 1866. He attended Peabody College and received a B.A. degree from Vanderbilt University in 1988. In his early years, Thomas was an educator. He was on the faculty of the East Florida Seminary, and that is where he received the title of major. He was also principal of Gainesville High School. He represented Alachua County in the Florida Legislature and served six terms as Gainesville's mayor. He was also a successful business leader and banker. Major Thomas died September 9, 1942, at his home in Gainesville. This residence is now the Thomas Center."

This building is listed on the National Register of Historic Places.