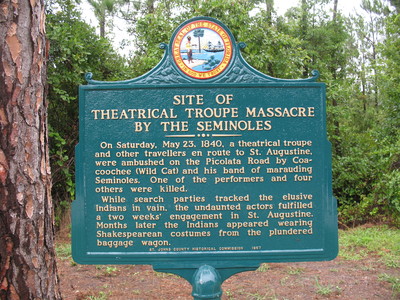 This is a memorial marker for the site of Theatrical Troupe Massacre.

" On Saturday, May 23, 1840, a theatrical troupe and other travelers en route to St. Augustine, were ambushed on the Picolata Road by Coacoochee (Wild Cat) and his band of marauding Seminoles. One of the performers and four others were killed. While search parties tracked the elusive Indians in vain, the undaunted actors fulfilled a two weeks' engagement in St. Augustine. Months later the Indians appeared wearing Shakespearean costumes from the plundered baggage wagon."