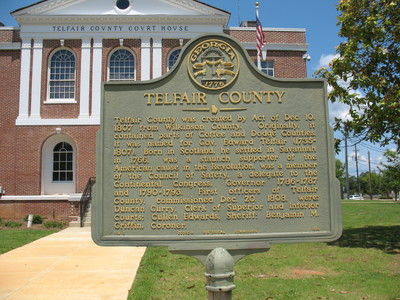 This marker is located outside the courthouse in McRae, Georgia.

" Telfair County was created by Act of Dec. 10, 1807 from Wilkinson County. Originally, it contained parts of Coffee and dodge Counties. It was named for Gov. Edward Telfair (1735- 1807). Born in Scotland, he settled in Savannah in 1766, was a staunch supporter of the American cause in the Revolution, was a member of the Council of Safety, a delegate to the Continental Congress, Governor 1786-1787 and 1790-1793. First officers of Telfair County, commissioned Dec. 20, 1808, were: Duncan Curry, Clerk of Superior and Inferior Courts; Cullen Edwards, Sheriff; Benjamin M. Griffin, Coroner. "