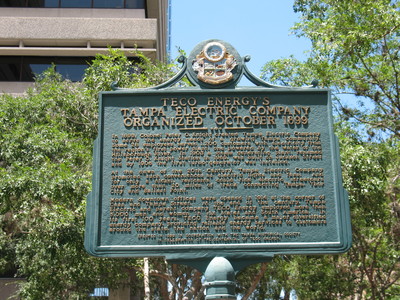 " In 1899, Colonel Peter O. Knight created Tampa Electric Company to serve the energy needs of a growing Tampa community. Some 28 employees served 1200 customers with electricity from the region´s first power plant, one powered by the water of the Hillsborough River. In 1903 a steam generating plant, renamed the Peter O. Knight Station in 1969, was built on Jackson Street and by 1906 the first turbo-generator was installed. At the dawn of the 20th Century, Tampa Electric Company promoted such conveniences as electric lights and fans, and over more than 20 miles of track connecting Tampa, Ybor City and Ballast Point.

Modern downtown offices were opened in 1914 at the corner of Cass and Tampa Street. At the end of the century, Tampa Electric and parent company TECO Energy employed moe than 5,000 men and women in six states and South America. In its first 100 years, TECO Energy became a major diversified energy company, providing reliable energy services to customers around the state, the nation and the world."

In cooperation with the Tampa Historical Society - 1999