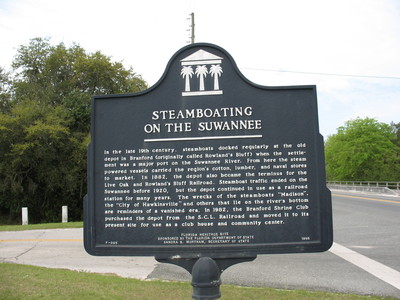 This marker is located at the intersection of U.S. 27 and Ivey Memorial Park Drive, Branford, FL.

" In the late 19th century, steamboats docked regularly at the old depot in Branford (originally called Rowland´s Bluff) when the settlement was a major port on the Suwannee River. From here the steam powered vessels carried the region´s cotton, lumber, and naval stores to market. In 1882, the depot also became the terminus for the Live Oak and Rowland´s Bluff Railroad. Steamboat traffic ended on the Suwannee before 1920, but the depot continued in use as a railroad station for many years. The wrecks of the steamboats "Madison", the "City of Hawkinsville" and others that lie on the river´s bottom are reminders of a vanished era. In 1982, the Branford Shrine Club purchased the depot from the S.C.L Railroad and moved it to its present site for use as a club house and community center."

Sponsors: The Florida Department of State.