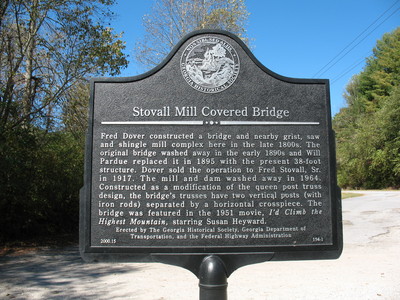 This 1895 covered bridge, also known as Sautee-Nacoochee, Helen Bridge and Chickamauga Bridge was built by Wil Pardue. It is at Chickamauga Creek.

" Fred Dover constructed a bridge and nearby grist, saw and shingle mill complex here in the late 1800s. The original bridge washed away in the early 1890s and Will Pardue replaced it in 1895 with the present 38-foot structure. Dover sold the operation to Fred Stovall, Sr. in 1917. The mill and dam washed away in 1964. Constructed as a modification of the queen post truss design, the bridge’s trusses have two vertical posts (with iron rods) separated by a horizontal crosspiece. The bridge was featured in the 1951 movie, “I’d Climb the Highest Mountain”, starring Susan Heyward."

Placed by the Georgia Historical Society.