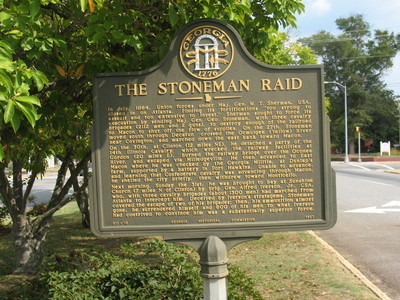 The Civil War in Georgia as told by its historic markers.

" In July, 1864, Union forces under Maj. Gen. W. T. Sherman, USA, closed in on Atlanta. Finding its fortifications "too strong to assault and too extensive to invest," Sherman sought to force its evacuation by sending Maj. Gen. Geo. Stoneman, with three cavalry brigades (2112 men and 2 guns), to destroy enough of the railroad to Macon to shut off the flow of supplies. On the 27th, Stoneman moved south through Decatur, crossed the Ocmulgee (Yellow) River near Convington, and marched down the east bank toward Macon. On the 30th, at Clinton (12 miles NE), he detached a party of the 14th Illinois Cavalry, which wrecked the railway facilities at Gordon (20 miles E), burned the railway bridge over the Oconee River, and escaped via Milledgeville. He then advanced to East Macon where he was checked by the Georgia Militia, at Dunlap's farm, supported by a battery in Fort Hawkins. Unable to advance, and learning that Confederate cavalry was advancing through Macon, he shelled the city briefly, then withdrew toward Monticello. Next morning, Sunday the 31st, he was brought to bay at Sunshine Church (7 miles N of Clinton) by Brig. Gen. Alfred Iverson, Jr., CSA, who, with three cavalry brigades (about 1300 men) had marched from Atlanta to intercept him. Deceived by Iverson's stratagems, Stoneman covered the escape of two of his brigades; then, his ammunition almost gone, he surrendered himself and 600 of his men to what Iverson had contrived to convince him was a substantially superior force."