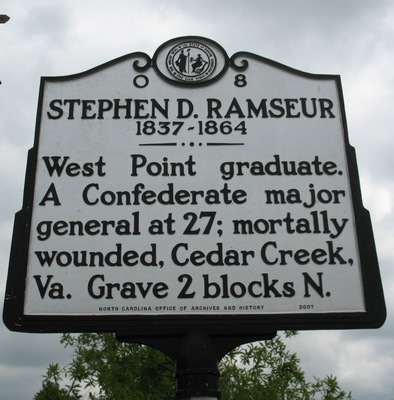 Stephen D. Ramseur, Confederate general, was born May 13, 1837 in Lincolnton, the son of Jacob A. and Lucy Wilfong Ramseur. He served with the 3rd United States Artillery stationed in Washington, D.C. On October 19, 1864, he was mortally wounded at Cedar Creek, Virginia. Taken prisoner, he died the next day at Sheridan’s headquarters surrounded by many of his former friends . The town of Ramseur, founded by veterans of his brigade, was named for him.

Placed By North Carolina Office of Archives and History in 2007.