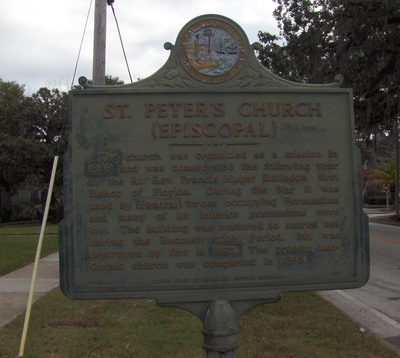 This marker is on Atlantic Avenue in Fernandina Beach in Nassau County, Florida. "Often called "The Jewel of Centre Street" this church is a textbook example of Gothic Revival architecture designed by noted architect Robert Sands Schuyler.

" The church was organized as a mission in 1858 and was consecrated the following year by the Rt. Rev. Francis Huger Rutledge, first Bishop of Florida. During the War it was used by Federal forces occupying Fernandina and many of its interior possessions were lost. The building was restored to sacred use during the Reconstruction Period, but was destroyed by fire in 1892. The present neo-Gothic church was completed in 1893."

Sponsored or placed by: Florida Board of Parks and Historic Memorials in 1961.