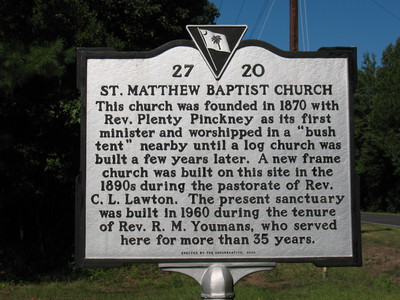 This marker was placed outside the church in Ridgeland, SC in Jasper County.

" This church was founded in 1870 with Rev. Plenty Pinckney as its first minister and worshipped in a "bushtent" nearby until a log church was built a few years later. A new frame church was built on this site in the1890's during the pastorate of Rev.C.L. Lawton. The present sanctuary was built in 1960 during the tenure of Rev. R.M. Youmans, who served here for more than 35 years. "

Placed By The Congregation in 2002.