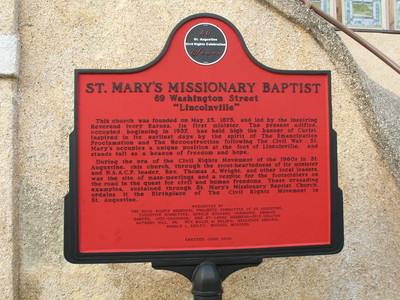 This church was founded on May 25, 1875, and led by the inspiring Reverend Ivory Barnes, its first minister. The present edifice, occupied beginning in 1937, has held high the banner of Christ. Inspired in its earliest days by the spirit of The Emancipation Proclamation and The Reconstruction following The Civil War. St. Mary's occupies a unique position at the foot of Lincolnville, and stands tall as a beacon of freedom and hope. During the era of the Civil Rights Movement of the 1960s in St. Augustine, this church, through the stout-heartedness of its minister and N.A.A.C.P. leader, Rev. Thomas A. Wright, and other local leaders was the site of mass-meetings and a respite for the foot soldiers on the road in the quest for civil and human freedoms. These crusading examples, sustained through St. Mary's Missionary Baptist Church ordains it the Birthplace of The Civil Rights Movement in St. Augustine."