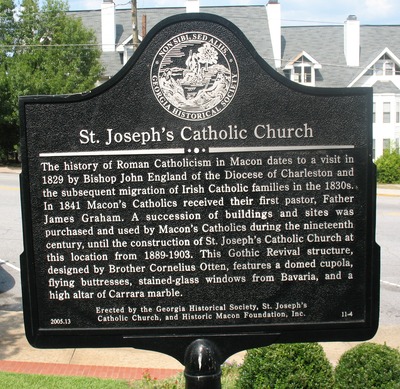 " The history of Roman Catholicism in Macon dates to a visit in 1829 by Bishop John England of the Diocese of Charleston and the subsequent migration of Irish Catholic families in the 1830s. In 1841, Macon´s Catholics received their first pastor, Father James Graham. A succession of buildings and sites was purchased and used by Macon´s Catholics during the nineteenth century, until the construction of St. Joseph´s Catholic Church at this location from 1889-1903. This Gothic Revival structure, designed by Brother Cornelius Otten, features a domed cupola, flying buttresses, stained-glass windows from Bavaria , and a high altar of Carrara marble."

Sponsored by the Georgia Historical Society.