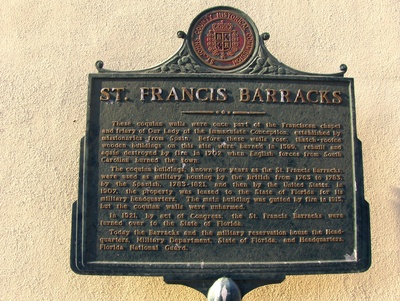 Built nearly 300 years ago and used by the military forces of five nations, the St. Francis Barracks stand in St. Augustine, Florida. The barracks are the headquarters of the Florida National Guard, a function they have fulfilled since 1907.

The text on the marker reads as : " These coquina walls were once part of the Franciscan chapel and friary of Our Lady of the Immaculate Conception, established by missionaries from Spain. Before these walls rose, thatch-roofed wooden buildings on this site were burned in 1599, rebuilt and again destroyed by fire in 1702 when English forces from South Carolina burned the town. The coquina buildings, known for years as the St. Francis Barracks, were used as military housing by the British from 1763 to 1783, by the Spanish, 1783-1821, and then by the United States. In 1907, the property was leased to the State of Florida for its military headquarters. The main building was gutted by fire in 1915, but the coquina walls were unharmed. In 1921, by act of Congress, the St. Francis Barracks were turned over to the State of Florida. Today the Barracks and the military reservation house are the Headquarters, Military Department, State of Florida, and Headquarters, Florida National Guard."