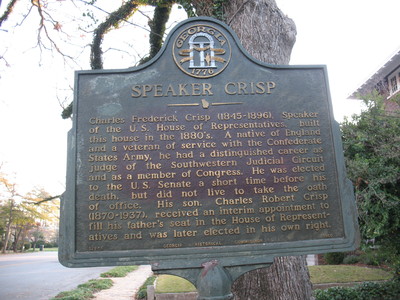 " Charles Frederick Crisp (1845-1896), Speaker of the U.S. House of Representatives, built this house in the 1880`s. A native of England and a veteran of service with the Confederate States Army, he had a distinguished career as judge of the Southwestern Judicial Circuit and as a member of Congress. He was elected to the U.S. Senate a short time before his death, but did not live to take the oath of office. His son, Charles Robert Crisp (1870-1937), received an interim appointment to fill his father`s seat in the House of Representatives and was later elected in his own right."

Sponsored by : Georgia Historical Commission in 1960.