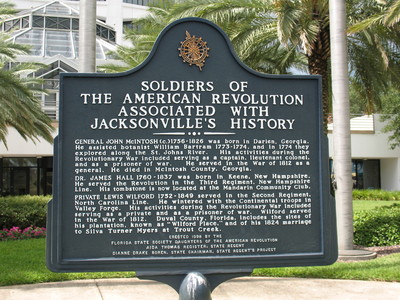 This marker was located just off the Riverwalk, on the south bank of the St. John's River, in front of the Wachovia Building.

" General John McIntosh (c)1756-1826 was born in Darien, Georgia. He assisted botanist William Bartram 1773-1774 and in 1774 they explored along the St. John's River. His activities during the Revolutionary War included serving as a captain, lieutenant colonel, and as a prisoner of war. He served in the War of 1812 as a general. He died in McIntosh County, Georgia.

Dr. James Hall 1760-1837 was born in Keene, New Hampshire. He served the Revolution in the Third Regiment, New Hampshire Line. His tombstone is now located at the Mandarin Community Club.

Private Lewis Wilford 1752-1849 served in the Second Regiment, North Carolina Line. He wintered with the Continental troops in Valley Forge. His activities during the Revolutionary War included serving as a private and as a prisoner of war. Wilford served in the War of 1812. Duval County, Florida includes the sites of his plantation, known as "Wilford Place" and of his 1824 marriage to Silva Turner Myers at Trout Creek."