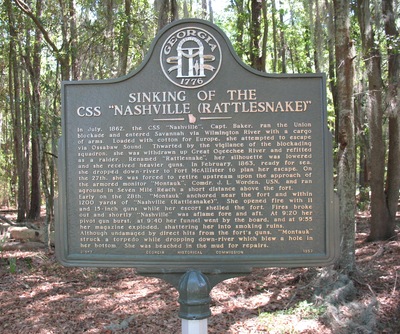 " In July, 1862, the CSS “Nashville”, Capt. Baker, ran the Union blockade and entered Savannah via Wilmington River with a cargo of arms. Loaded with cotton for Europe, she attempted to escape via Ossabaw Sound. Thwarted by the vigilance of the blockading squadron, she was withdrawn up Great Ogeechee River and refitted as a raider. Renamed “Rattlesnake”, her silhouette was lowered and she received heavier guns. In February, 1863, ready for sea, she dropped down-river to Fort McAllister to plan her escape. On the 27th, she was forced to retire upstream upon the approach of the armed monitor “Montauk”, Comdr. J.L. Worden, US , and ran aground in Seven Mile Reach a short distance above the fort. Early on the 28th, “Montauk” anchored near the fort and within 1200 yards of “Nashville (Rattlesnake)”. She opened fire with 11 and 15-inch guns while her escort shelled the fort. Fires broke out and shortly “Nashville” was aflame fore and aft. At 9:30 her pivot gun burst, at 9:40 her funnel went by the board, and at 9:55 her magazine exploded, shattering her into smoking ruins. Although undamaged by direct hits from the fort’s guns, “Montauk” struck a torpedo while dropping down-river which blew a hole in her bottom. She was beached in the mud for repairs."

Placed by the Georgia Historical Commission/Department of Natural Resources.