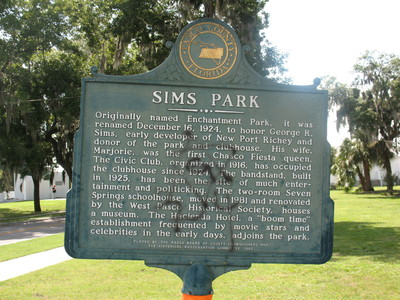 This large park, hosting the Chasco Fiesta today, is memorialized with a historic marker.

" Originally named Enchantment Park, it was renamed December 16, 1924, to honor George R Sims, early developer of New Port Richey and donor of the park and clubhouse. His wofe, Marjorie, was the first Chasco Fiesta queen. The Civic Club, organized in 1916, has occupied the clubhouse since 1924. The bandstand, built in 1925, has been the site of much entertainment and politicking. The two-room Seven Springs schoolhouse, moved in 1981 and renovated by the West Pasco Historical Society, houses a museum. The Hacienda Hotel, a 'boom time' establishment frequented by movie stars and celebrities in the early days, adjoins the park."

Sponsored or placed by: Pasco Board of County Commissioners and Historical Preservation Committee