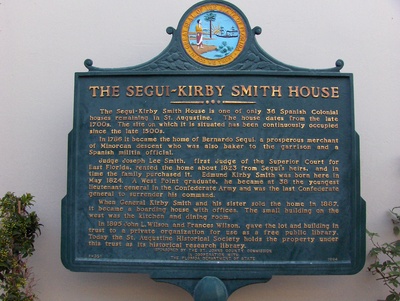 Constructed in the late 1700s by Bernardo Segui, this was the childhood home of Edmund Kirby Smith, A research library, which includes Civil War period archives, is now maintained at this site by the St. Augustine Historical Society. The collection is open to the public for research and is composed of files and books on Florida history, including those on the Civil War period and the Kirby Smith family.

" The Segui-Kirby Smith House is one of only 36 Spanish Colonial houses remaining in St. Augustine. The house dates from the late 1700's. The site has been continuously occupied since the late 1500's. In 1766 it became the home of Bernardo Segui, a prosperous merchant of Minorcan descent who was also a baker to the garrison and Spanish militia official. Judge Joseph Lee Smith, first Judge of the Superior Court for East Florida, rented the home avour 1823 and in time the family purchased it. Edmund Kirby Smith was born here in May 1824. A West Point graduate, he became at 38 the youngest Lieutenant General in the Confederate Army and was the last Confederate General to surrender his command. In 1895 John L. Wilson and Frances Wilson, gave the lot and building in trust to a private organization for use as a free public library. Today the St. Augustine Historical Society holds the property under this trust as its historical research library." -- Information quoted from Historical Marker."