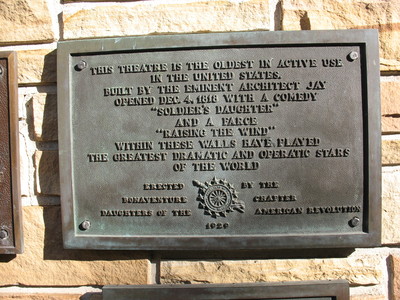 This marker is part of the Daughters of the American Revolution series.

" This theatre is the oldest in active use in the United States. Built by the eminent architect Jay Opened Dec.4, 1818 with the Comedy "Soldier's Daughter" and a Farce "Raising The Wind" Within these walls have played the greatest dramatic and operatic stars of the world [D.A.R. Emblem]

Placed By The Bonatenture Chapter, Daughters of the American Revolution.