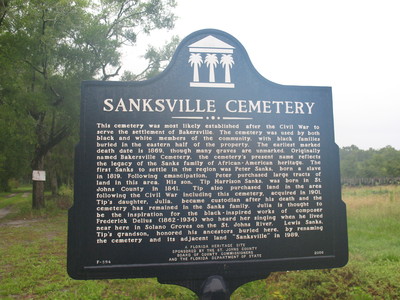 The historical marker, a joint initiative of the St. Johns County Board of County Commissioners, the Historic Resources Review Board and the State of Florida Division of Historical Resources, recognizes the history and significance of the Sanksville Cemetery, the Bakersville area and the Sanks family.

" This cemetery was most likely established after the Civil War to serve the settlement of Bakersville according to a media release from Karen Pan in the Office of Public Affairs of the St. Johns County Board of County Commissioners. The cemetery was used by both black and white members of the community, with black families buried in the eastern half of the property. The earliest marked death date is 1869, though many graves are unmarked.

Originally named Bakersville Cemetery, the cemetery present name reflects the legacy of the Sanks family of African-American heritage. The first Sanks to settle in the region was Peter Sanks, born a slave in 1819. Following emancipation, Peter purchased large tracts of land in this area. His son, Tip Harrison Sanks, was born in St. Johns County in 1841. Tip also purchased land in the area following the Civil War including this cemetery, acquired in 1901. Tipâ€™s daughter, Julia, became custodian after his death and the cemetery has remained in the Sanks family.

Julia is thought to be the inspiration for the black-inspired works of composer Frederick Delius (1862-1934) who heard her singing when he lived near here in Solano Groves on the St. Johns River. Lewis Sanks, Tipacs grandson, honored his ancestors buried here by renaming the cemetery and its adjacent land Sanksville in 1989."