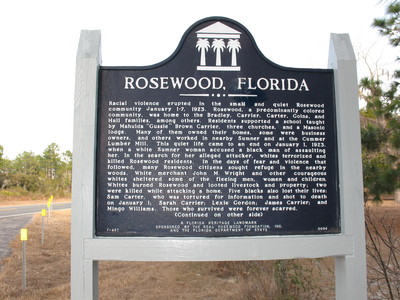 A historical marker about the Rosewood Massacre is located on State Road 24 in Rosewood, Florida.

The marker on the text reads as follows:

SIDE 1: "Racial violence erupted in the small and quiet Rosewood community January 1-7, 1923. Rosewood, a predominantly colored community, was home to the Bradley, Carrier, Carter, Goins, and Hall families, among others. Residents supported a school taught by Mahulda "Gussie" Brown Carrier, three churches, and a Masonic lodge. Many of them owned their homes, some were business owners, and others worked in nearby Sumner and at the Cummer Lumber Mill. This quiet life came to an end on January 1, 1923, when a white Sumner woman accused a black man of assaulting her. In the search for her alleged attacker, whites terrorized and killed Rosewood residents. In the days of fear and violence that followed, many Rosewood citizens sought refuge in the nearby woods. White merchant John M. Wright and other courageous whites sheltered some of the fleeing men, women and children. Whites burned Rosewood and looted livestock and property; two were killed while attacking a home. Five blacks also lost their lives: Sam Carter, who was tortured for information and shot to death on January 1; Sarah Carrier; Lexie Gordon; James Carrier; and Mingo Williams. Those who survived were forever scarred."

Sponsored or placed by: The Real Rosewood Foundation, Inc. and the Florida Department of State