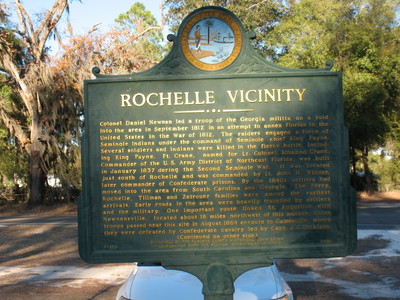 " Colonel Daniel Newnan led a troop of the Georgia militia on a raid into the area in September 1812 in an attempt to annex Florida to the United States in the War of 1812. The raiders engaged a force of Seminole Indians under the command of Seminole chief King Payne. Several soldiers and Indians were killed in the fierce battle, including King Payne. Ft. Crane, named for Lt. Colonel Ichabod Crane, Commander of the U.S. Army District of Northeast Florida, was built in January 1837 during the Second Seminole War. It was located just south of Rochelle and was commanded by Lt. John H. Winder, who later served in the Mexican War. By the 1840s settlers had moved into the area from South Carolina and Georgia. The Perry, Rochelle, Tillman and Zetrouer families were among the earliest arrivals. Early roads in the area were heavily travelled by settlers and the military. One important route linked St. Augustine with Newnansville, located about 16 miles northwest of this marker. Union troops passed near this site in August 1864 enroute to Gainesville, where they were defeated by Confederate cavalry led by Capt. J.J. Dickison. "