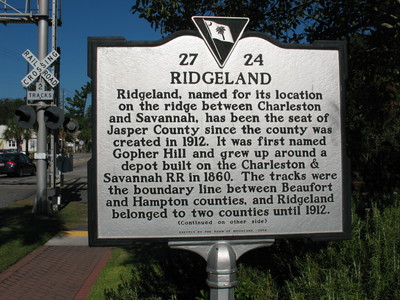 This marker is located in a small park on W Main Street in downtown Ridgeland, SC.

" Ridgeland, named for its location on the ridge between Charleston and Savannah, has been the seat of Jasper County since the county was created in 1912. It was first named Gopher Hill and grew up around a depot built on the Charleston & Savannah RR in 1860. The tracks were the boundary between Beaufort and Hampton counties, and Ridgeland belonged to two counties until 1912. "