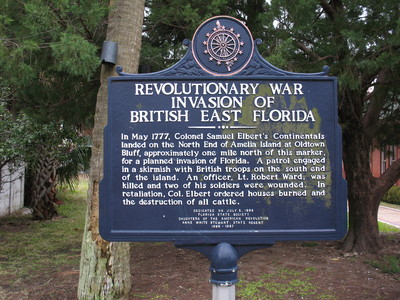 This is located on Centre Street near the old train depot in historic downtown Fernandina Beach, Florida.

" In May 1777, Colonel Samuel Elbert´s Continentals landed on the North End of Amelia Island at Oldtown Bluff, approximately one mile north of Florida. A patrol engaged in a skirmish with British troops on the south end of the island. An officer, Lt. Robert Ward, was killed and two of his soldiers were wounded. In retaliation, Col. Elbert ordered houses burned and the destruction of all cattle. "