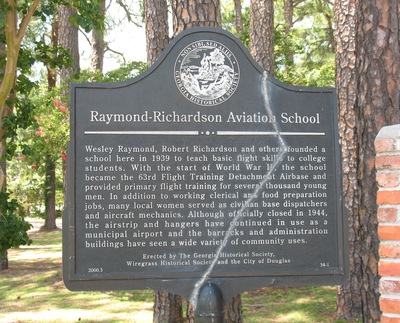 This marker is located at Douglas-Coffee County Veterans Park, US 441/221 S in Douglas, Coffee County, GA.

" Wesley Raymond, Robert Richardson and others founded a school here in 1939 to teach basic flight skills to college students. With the start of World War II, the school became the 63rd Flight Training Detachment Airbase and provided primary flight training for several thousand young men. In addition to working clerical and food preparation jobs, many local women served as civilian base dispatchers and aircraft mechanics. Although officially closed in 1944, the airstrip and hangers have continued in use as a municipal airport and the barracks and administration buildings have seen a wide variety of community uses."