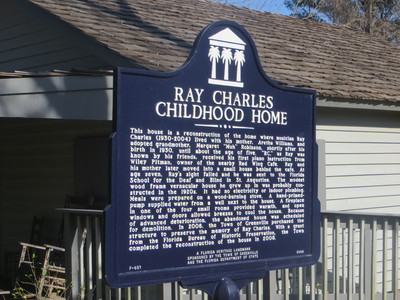 This marker is located on Ray Charles Road formerly(Western Ave)Greenville, FL. The childhood home of famous musician Ray Charles is in Greenville, Florida, USA. The home was restored and a Florida historical marker placed in front of the house in 2008.

" This house is a reconstruction of the home where musician Ray Charles (1930-2004) lived with his mother, Aretha Williams, and adopted grandmother, Margaret "Muh" Robinson. Shortly after his birth in 1930 until about the age of five. "RC," as Ray was known by his friends, received his first piano instruction from Wiley Pitman, owner of the nearby Red Wing Cafe. Ray and his mother later moved into a small house behind the cafe. At age seven, Ray's sight failed and he was sent to the Florida School for the Deaf and Blind in St. Augustine. The modest wood frame vernacular house he grew up in was probably constructed in the 1920s. It had no electricity or indoor plumbing. Meals were prepared on a wood-burning stove. A fireplace in one of the four small rooms provided warmth, and open windows and doors allowed breezes to cool the house. Because of advanced deterioration, the abandoned house was scheduled for demolition. In 2006, the Town of Greenville purchased the structure to preserve the memory of Ray Charles. With a grant for the Florida Bureau of Historic Preservation, the Town completed the reconstruction of the house in 2008."

Sponsored by: The Town of Greenville and the Florida Department of State