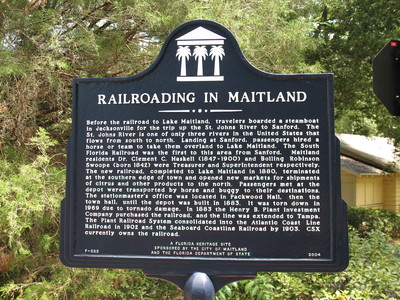 This marker is located near Lake Lily in Maitland, Florida.

" Before the railroad to Lake Maitland, travelers boarded a steamboat in Jacksonville for the trip up the St John's River to Sanford. Landing at Sanford, passengers hired a horse or team to take them overland to Lake Maitland. The South Florida Railroad was the first to this area from Sanford. Maitland residents Dr. Clement C Haskell and Bolling Robinson Swoope were treasurer and superintendent. The new railroad completed to Lake Maitland in 1880, terminated at the southern edge of town and opened new markets for shipments of citrus and other products to the north. Passengers met at the depot were transported by horse and buggy to their destinations. The stationmasters office was located in Packwood Hall, then the town hall until the depot was built in 1883. It was torn down in 1969 due to tornado damage. In 1883, the Henry B Plant Investment Company purchased the railroad and the line was extended to Tampa. The Plant Railroad system consolidated into the Atlantic Coast Line Railroad in 1902 and the Seaboard Coastline Railroad by 1903. CSX currently owns the Railroad."

Sponsored by The City of Maitland and the Florida Department of State.