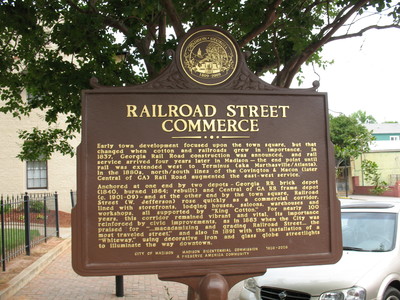 This marker is located in Madison in Morgan County, Georgia.

" Early town of development focused upon the town square, but that changed when cotton and railroads grew in importance. In 1837, Georgia Rail Road construction was announced, and rail service arrived four years later in Madison - the endpoint until rail was extended west to Terminus (a.k.a. Marthasville/Atlanta). In the 1880s, north/south lines of the Covington & Macon (later Central of Georgia) Rail Road augmented the east-west service. Anchored in one end by two depots - Georgia RR brick depot (1840, burned 1864; rebuilt) and Central of GA RR frame depot (c. 1901-09) - and at the other end by the town square, Railroad Street (W. Jefferson) rose quickly as a commercial corridor, lined with storefronts, lodging houses, saloons, warehouses and workshops, all supported by “King Cotton.” For nearly 100 years, this quarter remained vibrant and vital, its importance reinforced by civic improvements, as in 1883 when the city was praised for “… macadamizing and grading Railroad Street … the most traveled street,” and also in 1891 with the installation of a “Whiteway,” using decorative iron and glass globe streetlights to illuminate downtown."