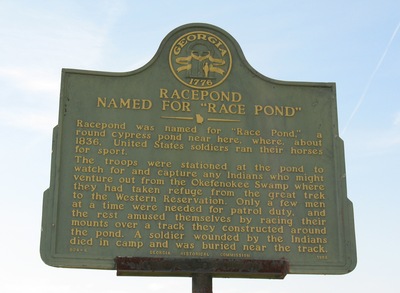 This marker is located in Charlton County, Georgia.

" Racepond was named for ´Race Pond´, a round cypress pond near here, where, about 1836, United States soldiers ran their horses for sport.

The troops were stationed at the pond to watch for and capture any Indians who might venture our from Okefenokee Swamp where they had taken refuge from the great trek to the Western Reservation. Only a few men at a time were needed for patrol duty, and the rest amused themselves by racing their mounts over a track they constructed around the pond. A soldier wounded by the Indians died in camp and was buried near the track."