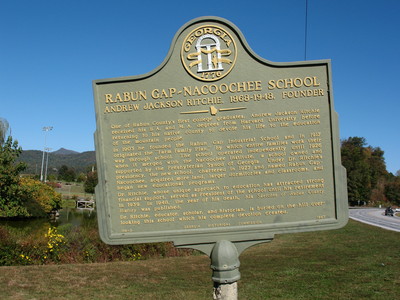 This marker is located at the entrance to Rabun Gap-Nacoochee School in Rabun County, Georgia.

" One of Rabun County`s first college graduates, Andrew Jackson Ritchie received his B.A. and M.A. from Harvard University before returning to his native county to devote his life to the education of the mountain people.

In 1903 he founded the Rabun Gap Industrial School and in 1917 originated the `Farm Plan.` by which entire families work their way through school. The school operated independently until 1926, when it merged with the Nacoochee Institute, a school owned and supported by the Presbyterian Synod of Georgia. Under Dr. Ritchie`s presidency, the new school chartered in 1927 and named Rabun Gap-Nacoochee, acquired more land, larger dormitories and classrooms, and began new educational programs.

Dr. Ritchie, whose unique approach to education has attracted strong financial support, served as President of the school until his retirement in 1939. In 1948, the year of his death, his `Sketches of Rabun County History` was published.

Dr. Ritchie, educator, scholar, and historian, is buried on the hill overlooking this school which his complete devotion created.