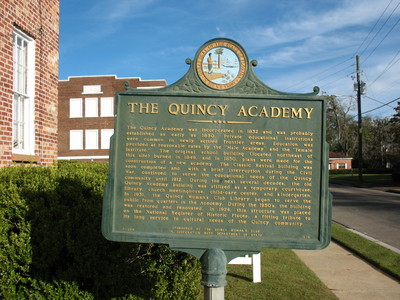 This marker is located on 303 North Adams Street in Quincy, in Gadsden County, Florida. The Quincy Library (also known as the Quincy Academy) is a historic library in Quincy, Florida, United States. On September 9, 1974, it was added to the U.S. National Register of Historic Places.

" The Quincy Academy was incorporated in 1832 and was probably established as early as 1830. Private educational institutions were common in newly settled frontier areas. Education was provided at reasonable rates by the "Male Academy" and the "Female Institute." The original school building (located northeast of this site) burned in 1849, and in 1850, plans were made for the construction of a new academy. The Classic Revival building was soon completed and, with a brief interruption during the Civil War, continued to serve the educational needs of the Quincy community until 1912. During the next several decades, the old Quincy Academy building was utilized as a temporary courthouse, library, church meetinghouse, child-care center, and kindergarten. In 1931, the Quincy Woman's Club Library began to serve the public from quarters in the Academy. During the 1950's, the building was restored and renovated. In 1974, this structure was placed on the National Register of Historic Places, a fitting tribute to its long service to cultural needs of the Quincy community."

Sponsored by the Quincy Woman's Club in cooperation with the Department of State.