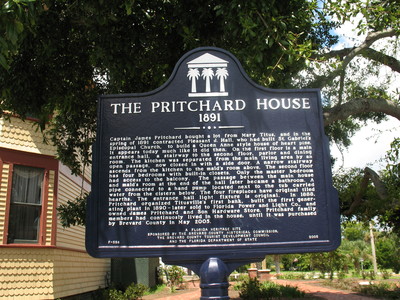 The Pritchard House is a historic home in Titusville, Florida, United States. It is located at 424 South Washington Avenue. On January 12, 1990, it was added to the U.S. National Register of Historic Places. The house is owned by the Brevard County Board of County Commissioners and operated by the North Brevard Heritage Foundation.

" Captain James Pritchard bought a lot from Mary Titus, and in the spring of 1891 contracted Pleasant J. Hall, who had built St. Gabriel's Episcopal Church, to build a Queen Anne style house of heart pine. It appears today much like it did then. On the first floor is a main entrance hall, a stairway to the second floor, parlor and dining room. The kitchen was separated from the main living area by an open passage, now closed in with a slide door. A narrow stairway ascends from the kitchen to the maid's room above. The second floor has four bedrooms with built-in closets. Only the master bedroom had access to the balcony. The passage between the main house and maid's room at the end of the hall later became a bathroom. A pipe connected to a hand pump located next to the tub carried water from the cistern below. The four fireplaces have original tiled hearths. The entrance hall light fixture is original. In 1888, Pritchard organized Titusville's first bank, built the first generating plant in 1890 - later sold to Florida Power and Light Co., and owned James Pritchard and Son Hardware Store. Pritchard family members had continuously lived in the house, until it was purchased by Brevard County in May 2005."