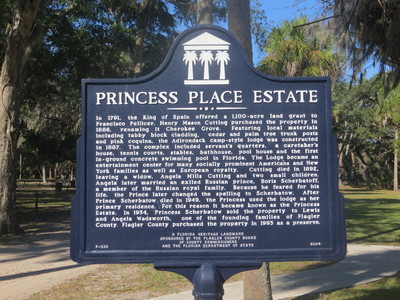 This marker is located on 2500 Princess Place Rd in Bunnell in Flagler county. The Princess Place Preserve (also known as Cherokee Grove) is a historic site in Bunnell, Florida. On May 2, 1997, it was added to the U.S. National Register of Historic Places.

" In 1791, the King of Spain offered a 1,100-acre land grant to Francisco Pellicer. Henry Mason Cutting purchased the property in 1886, renaming it Cherokee Grove. Featuring local materials including tabby block cladding, cedar and palm tree trunk posts and pink coquina, the Adirondack camp-style lodge was constructed in 1887. The complex included servant’s quarters, a caretaker’s house, tennis courts, stables, bathhouse, pool house and the first in-ground concrete swimming pool in Florida. The Lodge became an entertainment center for many socially prominent Americans and New York families as well as European royalty. Cutting died in 1892, leaving a widow, Angela Mills Cutting and two small children. Angela later married an exiled Russian prince, Boris Scherbatoff, a member of the Russian royal family. Because he feared for his life, the Prince later changed the spelling to Scherbatow. After Prince Scherbatow died in 1949, the Princess used the lodge as her primary residence. For this reason it became known as the Princess Estate. In 1954, Princess Scherbatow sold the property to Lewis and Angela Wadsworth, one of the founding families of Flagler County. Flagler County purchased the property in 1993 as a preserve."

Sponsors: the Flagler County Board of County Commissioners and the Florida Department of State