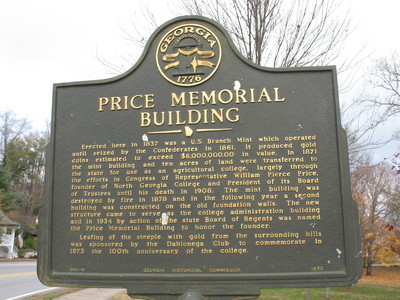 Price Memorial Hall, also known as the Price Memorial Building, is a historic site in Dahlonega, Georgia. The hall was built on the site of the U.S. government's federal branch mint built in 1836. It burned down in 1878 and the university, one of the first Federal Land Grant Colleges, had its hall built on the foundation. A historical marker is located on the site. It was added to the National Register of Historic Places on January 20, 1972. It is located on 82 College Circle. It is the oldest surviving building on campus and serves as the campuses main administartive building.

" Erected here in 1837 was a U. S. Branch Mint which operated until seized by the Confederates in 1861. It produced gold coins estimated to exceed ,000,000.00 in value. In 1871 the mint building and ten acres of land were transferred to the state for use as an agricultural college, largely through the efforts in Congress of Representative William Pierce Price, founder of North Georgia College and President of its Board of Trustees until his death in 1908. The mint building was destroyed by fire in 1878 and in the following year a second building was constructed on the old foundation walls. The new structure came to serve as the college administration building and in 1934 by action of the state Board of Regents was named the Price Memorial Building to honor the founder.

Leafing of the steeple with gold from the surrounding hills was sponsored by the Dahlonega Club to commemorate in 1973 the 100th anniversary of the college."